When the woman finds him, he stands unmoving inside a ring of smoldering ashes. He remembers nothing before this moment. And yet there are echoes of past lives, which give shape to words in his mind. The woman is a forest ranger, wearing a hat that covers nearly all of her mud-brown hair, except the ponytail tied behind her neck. She gawks in the middle of the clearing a few feet away, until tiptoeing toward him, posture low, as if reassuring a skittish deer. He wonders why she came here and how she found him. He hates her for how she stares.

Around him, the sharp scents of the forest smack of violence: charred pine bark, the rapid melt of snow and the lingering damp, the acidic odor of smoke. Cold emanates from beneath the seared earth under his talons. Overhead, the piping of a bald eagle startles him. He remembers his own wings at his back and stretches them out. The forest ranger takes a step toward him, her eyes sweeping across his wingspan, the condensation of her breath clouding around her cheeks.

The boundary of ash encircling him still glows with embers. It draws him, an intense sort of magnetism, and so he steps onto it with both feet. His toes catch fire. Euphoric tingling spreads across his body. The flames lick up his legs. Feathers on his chest burn. His outstretched wings, like the flags of forgotten nations set alight, blaze above the winter snow. He watches the fire consume him in the reflection of the forest ranger’s frightened eyes.

He rockets into flight.

He revels in his self-destruction, feels a perverse kind of rapture. He remembers now, this path to rebirth. And yet a new longing—to drag another to their death—supersedes his ancient urge of renewal. Is he not a magnificent creature? Why must he continue to die alone? The hungry tongues of flames leap from his feathers and taste the trees around him. Boiling sap secretes the stench of burnt butterscotch.

The forest ranger screams as he dives for her. His talons rip gashes in her coat, the cuts bursting with flames. He circles around for another dive. The fire continues to spread. He watches her slip from her coat and sprint toward a pond. She wades in up to her knees, pushes aside chunks of ice buoyed on the surface. She plunges under when he comes for her. His talons sizzle when they dip momentarily below the water. He screeches, attempts to land, but tumbles instead to the forest floor, a whirlwind of flames and feathers.

When he rights himself, gingerly, on his scorched talons, the woman emerges from the pond and approaches him. She shivers from the cold bite of the water, her hat gone, the end of her hair freezing into an icicle dagger. Her face hardens as she stares behind him toward the wildfire. Determination etches itself along the hard edge of her jaw, into the thin line of her lips. He cowers at the feet of this unfamiliar ice queen, his hatred diminished. Soaked and impervious to his flame, she lunges forward, extinguishing him with her frigid embrace. They both suffer the scald of the steam but only he crumbles to ash.

L. N. Holmes has published speculative stories in F(r)iction and Newfound. Her literary fiction has appeared in or is forthcoming from Vestal Review, Obra/Artifact, Varnish Journal, Laurel Magazine, Crack the Spine, and elsewhere. She won the Katherine B. Rondthaler Award for Poetry, the Salem College President’s Prize for Creative Writing, and first place for nonfiction in a literary journal from the North Carolina College Media Association. She is a graduate of the Creighton University MFA program, where she was awarded a half-fellowship. You can learn more about her at lnholmeswriter.wordpress.com 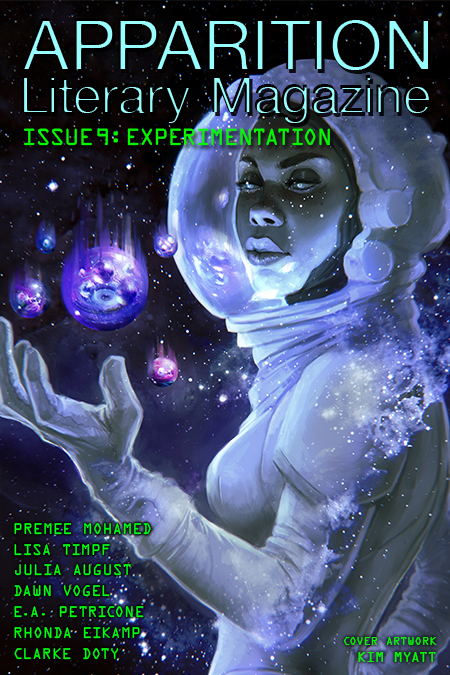